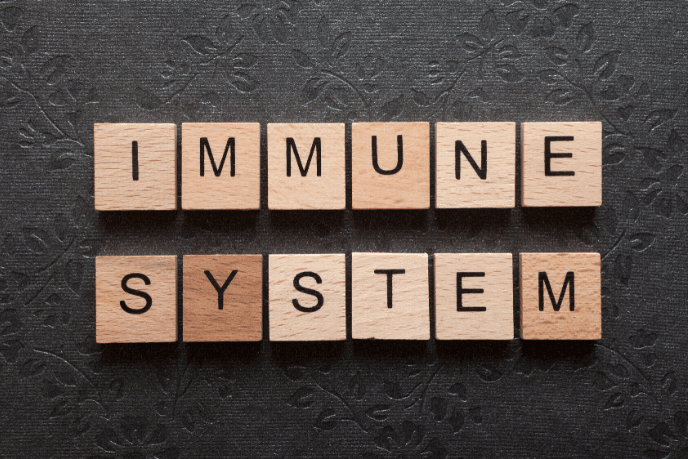 The immune system acts as a protection shield that protects your child from various attacks. Attacks can come in the form of pathogens( which includes virus, bacteria and fungus ) and parasitic worms (which are soil-transmitted).

Structure of the Immune system

The immune system of the human body is made up of special organs, cells and chemicals that are capable of fighting various infections.

One of the main parts of the immune system is white blood cells also called leukocytes which actively fights infection.

Phagocytes have the ability to roam around the blood vessels and tissue thereby to conquer the invaders. Invaders can be pathogens, pollution, Toxins, Parasites and carcinogen.

After conquering the invader the phagocytes sometimes releases a chemical that helps lymphocytes to identify the type of the invader.

Each lymphocyte carries antibodies to fight the antigens(a toxin or other foreign substance) carried by pathogens.

There are three main types of lymphocytes in the body:

B memory cells create antibodies that attack bacteria, viruses, and toxins that enter the body.

T cells destroy the cells in the body that have been conquered by viruses or that have become cancerous.

Like T cells, natural killer cells also destroy infected or cancerous cells. But instead of producing antibodies, they make a special enzyme, or chemical, that kills the cells.

Functions of the Immune system

Human body produces new antibodies whenever it is infected with a new antigen.

So whenever the body encounters the antigen again that is the second time the human body can quickly make copies of the corresponding antibody to destroy it.

These antibodies only live up to a few weeks, so it’s a good thing there’s a lot of them — a single drop of blood can contain up to 25,000 white blood cells.

There are 3 vital parts of the immune system

Innate or Natural immune system they’re something you acquire by natural means, like an infection or from your mother during birth. The innate immune system acts as the 1st protective shield against the invading pathogens. The defence mechanism of the innate system mostly involves physical barriers and chemical barriers such as skin, sweat, tears and mucus.

Adaptive (or active) immunity develops throughout our lives. We develop adaptive immunity when we’re exposed to diseases or when we’re immunized against them with vaccines.

After birth, breast milk passes the antibodies of the mother to the baby. These antibodies depend on the immunity to diseases the mother has been exposed to. This type of immunity is called passive immunity.

However the newborn, and particularly the premature baby are relatively susceptible to bacterial and viral infections. Passive immunity is temporary and the child begins to develop its own antibodies once they are exposed to antigens.

The immune system of a fetus starts to develop in the womb of the mother.

Antibodies are passed from mother to baby during the third trimester ( last 3 months of pregnancy ) through the placenta. After birth, Breast milk passes the antibodies of the mother to baby.

Colostrum a milk-like fluid produced following the childbirth is very nutritious and contains high levels of antibodies that fight infections and bacteria.

During the natural birth process, the baby is exposed to antigens when passing through the birth canal and being subjected to them directly. This helps to build the colony of bacteria in the gut that contributes to their immunity. This is not the case for babies that are born through a Caesarean section.

Breastfed babies have fewer infections and get better more quickly than formula-fed babies.

Breastfeeding results in passive protection against infections, allergy and likely long-lasting active immunity. In addition to that, it also enhances the immune system of the baby possibly with several long-term positive effects.

However breast milk is not the solution for some serious and  life threatening diseases.

WHO AND UNICEF recommend exclusive breastfeeding for at least the first 6 months of the infant’s life.

As the newborn immunity is passive it is highly recommended to start vaccinations as prescribed by your paediatrician. It is the parent’s responsibility to keep track of immunizations and get them on time which in turn helps to keep your child stay healthy.

Nutrition plays the prime role in your child’s health and development.

Children with adequate nutrition are productive and better learners.

From 6 months of age, breast milk should be complemented with a variety of adequate, safe and nutrient-dense foods. Know more about 6-month baby food recipes.

In general, best foods are considered to be,

Children need 3 meals and 1 to 3 snack per day.

Educate your child about the nutrition value of specific food and why it is to be consumed. Tell them that the super hero’s they love to watch eat these superfoods. Tell them they will be rewarded for eating fruits/vegetables. This way your child will start relating to food, ensure to eat them and stay positive.

“One cannot think well, love well, sleep well, if one has not dined well.”
― Virginia Woolf, A Room of One’s Own

Involve your kids to some sort of physical activity which helps to get rid of bacteria out of lungs and airways.

Encourage your children to participate in activities that are age-appropriate and enjoyable.

Limit screen time – The American Academy of Pediatrics (AAP) recommends not
more than 2 hours of quality television and video viewing per day for children aged ≥2 years.

To maximize immunity, children must get enough sleep.

Promote hand-washing regularly with soap and water for a minimum of 20s in order to prevent infections and avoid spreading infections to those around you.

Handwashing can help prevent diarrhoea and pneumonia, two of the major causes of death in children around the world.

Educate your kids about the benefits of hand-washing.

Proper handwashing is recommended before meals and after going to the toilet can lower exposure to germs.

Recently Researchers at Georgetown University (US), have found that sunlight energizes the T-cells that play a central role in human immunity.

Getting 5 to 15 mins of sunlight two to three days a week is enough to receive the benefits of vitamin D.

“ Too much of anything is good for nothing”

Even if you follow all these tips, your child may likely fall sick with common infections like cold and fever. Remember colds and fever are always good because it is the body’s way of fighting the infection out. Always consult your paediatrician while introducing new foods, while starting with any medication etc.,

” Prevention is always better than Cure “

Hey! I am Aswini Nachiyar, a Software Engineer by profession, Art is my passion and now Blogging.